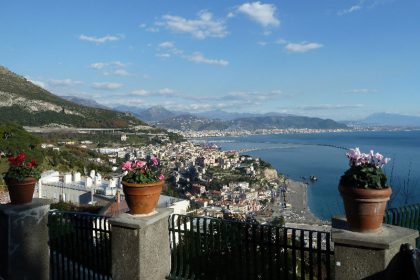 The small village is situated on a hill along the Amalfi Coast, about 3 km from Vietri sul Mare. It became famous because most of the fiction “Capri” scenes was filmed here.
Raito is world – known famous for the characteristics stairs, which are the only way to move in the country. In fact, it has only two roads, one on top and one at the bottom. its name comes from the Latin “ragitus” that means kissed by the sun. Thanks to its amazing position, on the sun ” you can enjoy a magnificent view over the Gulf of Salerno and Vietri, and it is considered a natural paradise between mountains and sea. Due to the good exposure the small village presents valuable vineyards as well as an interesting museum dedicated to the famous local ceramic.