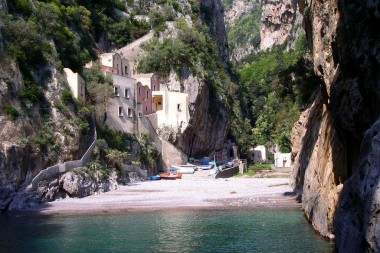 Escaping Romans, barbarians at their backs, took refuge in these mountains, and founded the first settlements. Furore has remained, owing to its particular topology, an unassailable stronghold, even during the times of the Saracen raids. The fjord makes for a natural port, where trade flourished, encouraging the growth of the burgeoning paper industry and agriculture: the waters of the Schiato river powered paper and grain mills as they descended from the Lattari mountains.
Furore takes its name from the particular fury with which the sea batters the coast during storms, and from the deafening, terrifying roar of the waves against the cliffs and in the fjord.
Furore is home to four churches: San Giacomo, San Michele, Sant’Elia and Santa Maria Della Pietà, the latter once home to one of the most important and prestigious confraternities of the Diocese.